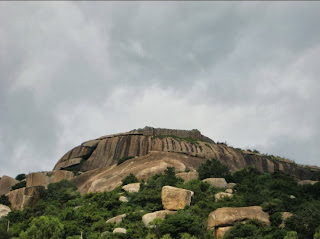 
History lies behind this fort in later half of the 18th Century saw a war between the Marathas, Hyder Ali and the British for power.


The Maratha empire, which was till then torn by internal strife suddenly reasserted itself under Madhava Rao I. The Maratha army under his leadership began an unstoppable, whirlwind expedition to wipe out Hyder Ali. Beginning with Adoni, Madhava Rao took Bellary, Kurnool, Devadurga, Rayadurga, Kolar, Bhairavgad (near Bangalore), Devarayanadurga (near Tumkur), and reached Nijagal, en route to his final destination, Srirangapatana, Hyder Ali’s capital.


The Nijagal fort was built at the tip of the rocky mountain. Nijagal resembled an enormous, rocky semicircle placed atop a mountain decked on all directions with gigantic, steep, slippery boulders, effectively sealing it off from any sort of assault. The altitude of the fort was beyond the reach of cannonfire. Physical scaling of the fort was scorched by pouring enormous amounts of boiling oil and water, and excreta from specially-constructed holes (typically) near the top of the fort to make ascent impossible. A Burj/Bateri (an oval-shaped construction made of stone, sand and mortar and served as a watch tower) had guards patrolling round the clock. A large, deep and wide fosse circumvented the base of the mountain and was sprinkled with thorns. Crocodiles were bred in the moat to add yet another layer of security. Besides, Nijagal was never in the danger of running out of water. Three fresh-water mountain streams–Rasa Siddara Done (Done=stream/pond), Kanchina Done, and Akka-Tangira Done –provided ample water supply. It was tough for enemies to conquer this fort..


BTC trek has become my weekly ritual now :-) My friends outside BTC don't even count me on their Saturday plans, they  have realised that I would be definitely with BTC.. Their conversation with me has changed from "What plans for the weekend" to "Which hill you trekking this Saturday?" :-) So this time it was Nijagal Betta near Tumkur organised by Channa. I didn't wanted to fumble with my hasty decisions like my previous treks so like a good girl I waited for the registration to open and I signed up for the trek. As usual i was happy to be shortlisted :) 7.15 was our meetup time at Bangalore railway station platform 10, coach 15. The information looks so precise but it took hell lot of time to figure out the coach no as it reads different from the engine side and the rear side of the train. Myself and Abhishek had to call up Channa to figure out, he told us they were near the AC coaches. "AC coaches to travel?!!" wow! BTC has surprises everytime, I thought and after about twenty mins we found them. Now am an old member of BTC ( Ain't blowing my own trumpet :-P ) I greeted all my old  friends and could see many new members. ( Realised after a while that AC coach was just a landmark :( )


Tumkur express arrived at 7.45 and we didn't delay a moment, got into the train and reserved places for our members. We occupied two compartments. Within ten mins the train left the platform. Though journey was for about 90 mins it didn't seem that long, thanks to Aditya who claims that he doesn't talk much ( OMG he talks non stop!!) and loud clappers (The super tall ones with super long limbs whom you encounter often in trains asking for few bucks and inturn shower you with blessings ) kept us entertained throughout the journey. With help of Santosh and Uday's online maps we did not miss our stop, got down at Dobbaspet. From the station we had to go to the hotel for breakfast and to take lunch parcel. It was a km distance. We took two autorickshaws. We were 23 in number. The share auto in a second had transformed into  "stuff autos"! We were 13 in one and 10 in the other. I wished I sat in the other auto, coz it had dolby stereo music system.

We reached the hotel in five mins, Veerabhadraswamy Veg hotel on Madhugiri main road. We all barged into the place, some had idly vada and some lemon rice/vangibath. Took lunch parcels, back into the autos and headed towards Nijjgal Betta. After 5-6km ride we reached the place. The hill was on the other side of the railway track, we crossed the track and walked some distance to reach the foothills. It was our introduction round. The youngest trekker for the day was Nikhil (3rd std). Two rules for the day as told by Channa : Leave no trace (plastics), take only pictures, leave only footprints and Unity in strength so stay in a group! By 10 we began our trek. The mood of the day had just changed from cloudy to bright sunny day. Weather was scorching hot, sunrays piercing into the eyes so after a long time I could use my sunglasses! ( Everybody were wondering did they check Channa's mail right which read carry winter clothing and rain clothes :-P ). Vaibhav had such high hopes that he trekked throughout anticipating rain and thunderstorms so that he can happily use his brought heavy winter clothes! It was just 2% of the trek, we found few boulders resembling a cave with cool shade. All of us squeezed into that region to rest for a while. 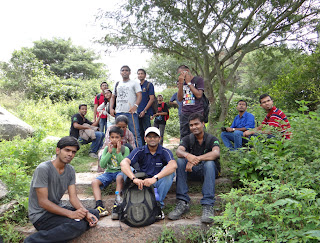 Since there was no rain we got ourselves drenched with our own sweat! ( no exaggeration! ) No matter how tired or exhausted we got, we were ready to smile and pose for the clicks!


After some rest we began to ascend. We entered the fort through a stone bricked entrance. The hot day was draining us out. We took another break, I must say Sangamesh has a creative eye, he described the hills at a distance as kissing faces, (true that eyes only see what the mind is prepared to comprehend :-P, we only saw the face like hill and simply nodded yes to him to cause no offence!!) After some bantering we proceeded, found a small pond. We walked beside the pond and climbed a steep boulder, it was our third break! We waited for everyone to arrive and then took group pics. It was cute to see Nikhil and his parents trek with us, that shows passion has no age limits! After a quick climb we reached an ancient temple which was almost in ruins. (Lot of history associated with this place which you can Google :-P) 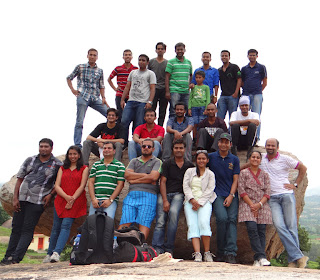 The temple was a nice place for us to relax and for photography. Abhishek so wanted to take a mushy pic with the woman carved on the stone, Sangamesh and I intruded their privacy by making it a group snap :-P I wonder why Channa feels am violent, he made me pose as Kaali and whoa! I had more than 5 pairs of hands in secs! After capturing loads of photos we rushed up. Climbed few steps and reached a small landing which had stone benches to sit. Some of us waited there till others caught up with us. There was a huge tamarind tree, Sangamesh and Prakash sat under the tree shade. As a kid I've heard stories from my grand parents that tamarind trees are possessed with bad spirits! ( Lets just pray these guys were not possessed by Ghosts :-P) 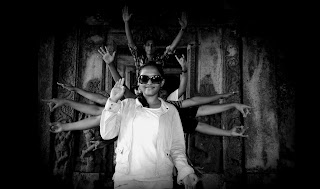 On the way we also found a Dargah and lot of voodoo stuff which was so creepy. The next challenge was a steep boulder leading to the fort, after some pulling and pushing all of us were now. standing on the other side of the fort. We all sat on the fort wall imbibing the scenic beauty around us. The Shivgange hill stood so tall amidst the clouds. I locked this place on my trek list. The sun did show some mercy on us and disappeared into the clouds, replaced with cool breeze wiping off our sweat from our foreheads. For those who are bored off watching SRK's lungi dance on all music channels the monkeys shake dance on the tree branches was a sight not to be missed! 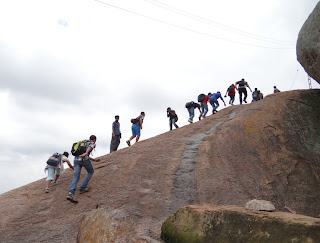 After some more climbing we reached the top of the hill. We sat there and got soaked up with the beautiful nature around. The only person who was heartbroken for the day was Geo! ( The she monkey turned down his proposal when he got down to his knees with a bunch of so called flowers in his hand :-P ) Later we consoled him he can always find somebody better :-P Our rumbling stomach reminded us that we were hungry. We descended down to avoid monkeys and began to eat our lunch. One by one the monkeys  encircled us. We tried to scare them with sticks and our screams but we were in turn scared by them, so offered our food thanking them for their dance and hospitality, quietly left the place! My treks cannot go complete without lemon grass shopping! Many many thanks to Santosh and Abhishek for cutting more lemon grass for me! 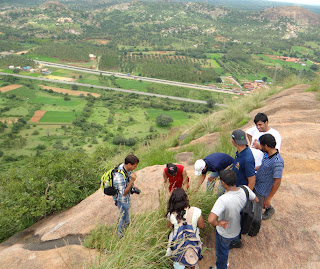 Santosh gave us a big surprise, he had got us a big grape fruit from his last Ooty trek, we were literally fighting for a big chunk of the fruit. We started to descend by 1. The Cowboy Surya (coz of his cowboy hats!) kept collecting plastic wastes on the way down, we took just 30mins to reach the base of the hill. 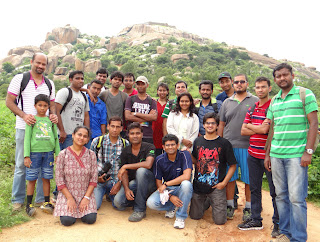 Our return train to Bangalore was at 4.20 so we decided to trek till the Dobbaspet station on the railway track as we had loads of time left to kill. Ruwise and I had a race over the railway track, obviously I won :-P ( My previous experience during Makalidurga trek came into help!) 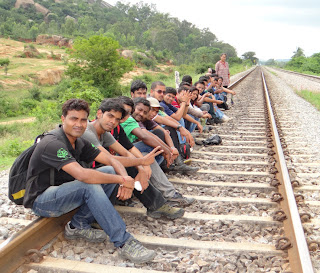 Vignesh and Aditya marked the distant flyover bridge as their destination but they kept complaining as they walked, the bridge seemed like a Mirage to them and they could never touch that point. Soon enough we came across a train on the parallel track, Uday and Aditya like kids placed one rupee coins on the track, after the train passed by we checked the coins. The coins were totally deformed with no traces of anything on them. Pavithra was amazed to see those coins and got carried away with the 'magnetism theory' of Raja, Surya and Uday. Almost everyone's water reserve had got over, Naresh was kind enough to give few sips. 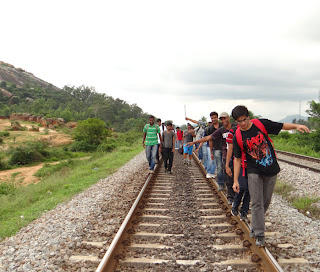 By 3.30 we reached the station, found a small tea shop, ordered for a strong cup of tea. Meanwhile we had the feed back session (The treks are just perfect every time, is there really a need for a feedback session?? :-)) 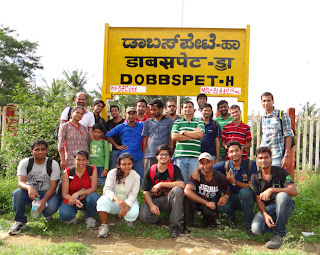 We still had half an hr time. We spotted a tamarind tree near the platform, Ruwise, Nikilesh and Uday climbed over the fence walls and plucked tamarind for all of us. The train arrived at the right time, we got into the train and sat wherever seats were vacant.


So our journey back to home continued, I had missed on Guru's hypnotism and super natural stories in the day, the members who had heard him filled me on that! By 5.30 we reached Bangalore, bid au revoir to each other and went home. I don't have to say that it was another amazing trek with BTC, if it wasn't I wouldn't be taking off my time out and penning down about this trek :-) Thanks a ton to Channa for a brilliant trek and all the members (my new friends) for making it a wonderful day :-)

Travel Guide:-
By Train;
# Train facility is available from Bangalore Centrail Railway station to Dabaspet and vice versa (Monday to Saturday)
Onwards Journey;
Train No: 56515
Train Name: Bengaluru City – Hubli Passanger
Return Journey;
Train No: 56226
Train Name: Tumkur Bangaluru Passanger
By Bike;
# Drive on Tumkur Road till Dabbaspet (50kms).
# After Kammat Uppahar (On left), you will see small entrance below railway track.
# Pass underneath it which goes to base of Nijagal betta
# Follow the trail through the electric poles which takes you to top